You are here: Home / Design / Fashion / On Uniforms, or Would You Wear the Same Dress For a Year?

A Cup of Jo recently posted on The Uniform Project, Sheena Matheiken’s attempt to wear one dress for a year. Below are some of my favorite outfits thus far: 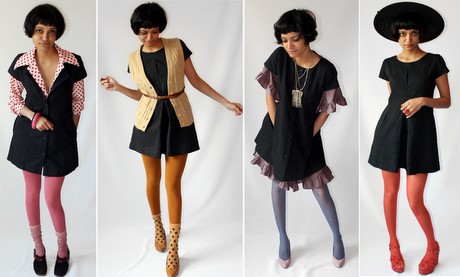 While it’s true that Alex Martin did something similar with her brown dress project in 2005*, this iteration offers something new. First, the two projects have different goals: the brown dress project was a direct challenge to unsustainable consumerism, while The Uniform Project is a fundraiser and decidedly more fashion forward. Because she was promoting sustainability & personal economy, Martin used one dress for the entire year; Matheiken, on the other hand, has 7 of the same dress, has a vast closet filled with layering options and accents, and lets readers donate accessories.

In addition, The Uniform Project explores the interesting tension between conformity & self-expression. Matheiken wrote that part of her inspiration was that:

I was raised and schooled in India where uniforms were a mandate in most public schools. Despite the imposed conformity, kids always found a way to bend the rules and flaunt a little personality. (link)

Anyone forced to wear a uniform will recognize their experience in that statement. And yet, strangely, I’ve always considered uniforms as freeing rather than constricting. It’s the difference between the uniform you’re required to wear, and the one you adopt for yourself.

Because although I like fashion, it’s mostly in theory. By nature, I gravitate towards a uniform: a white, blue, or black form-fitting top paired with dark pants and black flats. My college friends once teased me for only wearing white, blue, & black, so I tried branching out to reds, pinks & lavenders. Each new color foray ended up rotting in my closet, though: I always felt like I was wearing someone else’s clothes, trying to be something I wasn’t.

To this day, the bulk of my wardrobe is white, black, or blue, although I’ll stray into greens, and (if I’m feeling daring) purples. I comfort myself that at least I’m more flexible than these fellows. And truthfully I know what I like, what suits me, and best of all, everything matches.

Finally, here’s a quote on uniforms from Marguerite Duras’ Practicalities

. I read it years ago & it managed to burn its way into my subconscious:

For fifteen years I’ve had a uniform – the M.D. uniform. It apparently created a ‘Duras look’, which was taken over by a fashion designer last year: black cardigan, straight skirt, polo-neck sweater and short boots in winter. I said I didn’t care about clothes, but that’s wrong. A uniform is an attempt to reconcile form and content, to match what you think you look like with what you’d like to look like, what you think you are with what you want to suggest. You find this match without really looking for it. And once it’s found it’s permanent. And eventually it comes to define you.

*Andrea Zittel also did something similar before, but as with Alex Martin’s, the goals & functions of her project were significantly different. For starters, Zittel embraced the monotony of a uniform, while Matheiken does not.

**For more inspiration, Sally Jane Vintage has a series called “Four Ways,” where she styles one item, umm…four ways. Other bloggers have done a fashion blogger version of the “Sisterhood of the Traveling Pants,” first with a striped shirt and then with a leather jacket.