This is part of a series on Beautiful Books; see the full series here. 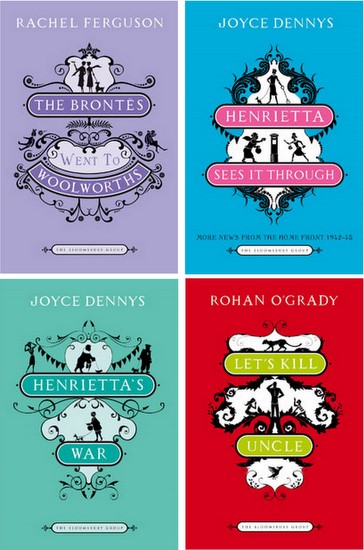 The Bloomsbury Group is self-described as “a new library of books from the early twentieth-century chosen by readers for readers.” Judging by the blank website, the idea did not take off & has presumably been abandoned. That said, I love the covers & book descriptions of the existing titles, which are still in print.

, about orphan & heir Barnaby Gaunt, who realizes he must kill his murderous uncle before his uncle kills him; and a recent purchase, Miss Hargreaves

, wherein a letter to an imaginary octogenarian goes awry when the fictional woman turns up–real, in the flesh–on the letter writer’s doorstep.

Other notable books include Mrs. Tim of the Regiment

& the sequel Henrietta Sees It Through

). I’ll leave you with the description of Henrietta’s War, which epitomizes the quirky coziness of the line:

Spirited Henrietta wishes she was the kind of doctor’s wife who knew exactly how to deal with the daily upheavals of war. But then, everyone in her close-knit Devonshire village seems to find different ways to cope: there’s the indomitable Lady B, who writes to Hitler every night to tell him precisely what she thinks of him; the terrifyingly efficient Mrs Savernack, who relishes the opportunity to sit on umpteen committees and boss everyone around; flighty, flirtatious Faith who is utterly preoccupied with the latest hats and flashing her shapely legs; and then there’s Charles, Henrietta’s hard-working husband who manages to sleep through a bomb landing in their neighbour’s garden.